Crucial Catches: How Larry Fitzgerald is Changing the Game

In 2003, Larry Fitzgerald lost his mother, Carol, to breast cancer. In order to help raise awareness and funds for breast cancer research, Larry Fitzgerald launched the Crucial Catch Challenge where he pledges $1,000 for every catch in October, as well as $10,000 for every touchdown he scores and Cardinals win. Every year, Larry has been able to support the American Cancer Society.

"Breast cancer is the most common cancer among American women, except for skin cancers. About 1 in 8 (12%) women in the US will develop invasive breast cancer during their lifetime.”

Since 2003, Larry has been raising awareness and funds for breast cancer research but in 2015 he asked fans to join his fundraising efforts by launching the Crucial Catch Challenge on Pledge It

Fans were given the opportunity to pledge any dollar amount for every Larry earned during the month of October. Fans could also make a one-time flat donation to support his efforts. 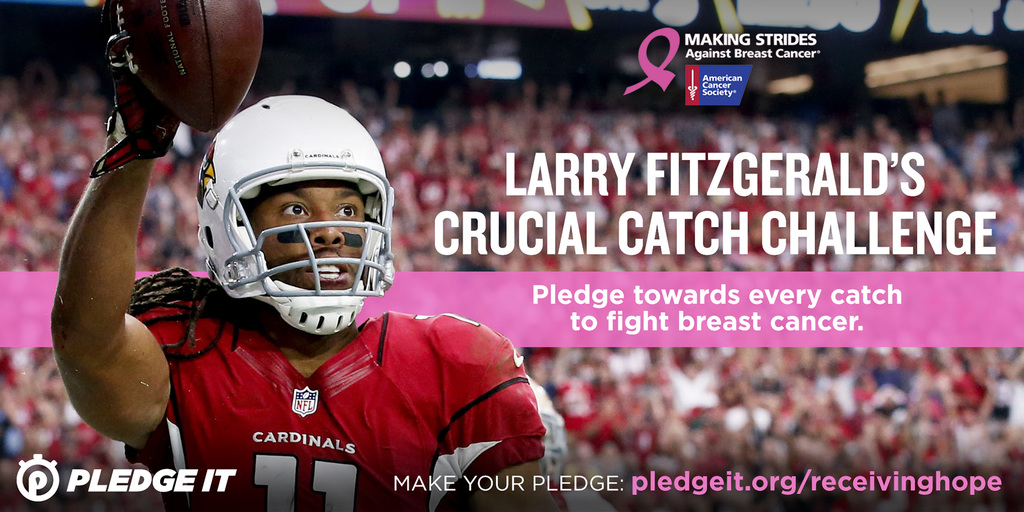 During Breast Cancer Awareness Month, fans were able to raise $28,766 for Larry’s Crucial Catch campaign. In the 4 games played in October, 64 fans pledged a total of $1,250.71 per catch and Larry earned 23 catches. The average donation was $450, which is 7x more than the average online donation. Lastly, there were over 250,000 Twitter impressions, 500 retweets, and over 3,500 Facebook likes.